Would You Pay $599 For The Dyson Supersonic Hair Dryer?

Dyson has a knack for coming up with overpriced gadgets that actually sell like hotcakes despite the hefty price tag. First there was the vacuum cleaners – so sleek, so effective, and most importantly, so good at getting the men to take over the cleaning. Then came the quiet and children-friendly blade-less fans. And now, the latest Dyson cult product is the Dyson Supersonic hair dryer & Airwrap curler.

Let’s have a look at the prices.

Dyson hair dryer prices in Singapore – how much does it cost?

Siao, right? I recently replaced my broken hair dryer and thought I was a complete baller for buying a “professional, salon-standard” hair dryer that cost me $200.

Regular hair dryers don’t even cost that much. The cheapest ones are the small, travel-sized ones, and they can be as cheap as $20+. Full-sized ones are usually around $50+ to $100.

Anything over $100 is considered quite premium – they usually come with nozzle attachments and are branded (Braun, Philips, etc).

Assuming the “average” price is around $100, the Dyson Supersonic hair dryer is literally 6X the price.

Dyson hair dryer promotions in Singapore – does it ever go on sale?

The worst part about Dyson cult products is that they hardly ever go on sale. I tried searching for the Dyson hair dryers via Lazada and Qoo10, and found that some third party retailers sell it for slightly cheaper.

The cheapest price I found for the Dyson Supersonic hair dryer was $498.95 on Lazada, from a local retailer is called Fepl. The store has an 87% positive rating and has been on Lazada for 4+ years, so it seems pretty legit. There’s no note on warranty though.

On Qoo10, there was a seller (Lucky Store Sg) selling it for $499 (so just 5 cents more), but it’s explicitly stated that it comes with the 2-year warranty with Dyson. It’s also on also on sale at Harvey Norman at the time of writing, but it’s only $40 off.

On Dyson’s official store, there are occasional seasonal promotions. Currently, there is a Ramadan promotion set. For $599 – the usual price for the Supersonic hair dryer only – you get a free box case and stand (worth $128). It’s not actually a discount lah, you just get freebies.

You can also get the Dyson Supersonic gift edition at the same price ($599), which comes with a detangling comb & paddle brush.

Although you can buy it for up to $100 cheaper, it’s still going set you back almost $500 no matter what. In my opinion, that’s still ridiculous for a hair dryer.

Dyson hair dryer review – is it worth paying $599?

You’d think any sensible person would be enraged at a $599 hair dryer, but no. Instead, beauty bloggers (and uhm, almost everyone who actually owns one) is raving about how life-changing the dang device is.

Apparently, this miracle hair dryer took $98mil and 4 years to develop, so let’s first take a look at what magic Dyson claims to be selling:

Although not mentioned in the official product page, a lot of bloggers also rave about how quiet the hair dryer is. Some say it’s so quiet, you can actually have a conversation while drying your hair. It’s not silent, but it’s a lot less noisy than conventional hair dryers because it uses the same airflow technology as the famous Dyson blade-less fans.

In a review by NYLON, the reviewer writes that “once you’ve tried it, the other regular stuff just won’t cut it anymore”. Local blogger Shuxian wrote on her blog review that when compared to her swanky Braun Satin Hair 7 Professional hair dryer, the drying time is reduced by half. On Alvinology, the writer’s verdict is that it’s a worthy investment because “it’s about the same price as 2 or 3 hair treatment sessions for ladies with long hair”. Allure says “it’s worth every freaking penny”.

Okay, so blogger maybe sponsored then cannot trust right? I also say! Let’s see what people have to say on the forums.

Oddly enough, most people on Reddit and other forums actually agree.

Some even go so far as to say it was a “good financial decision”. 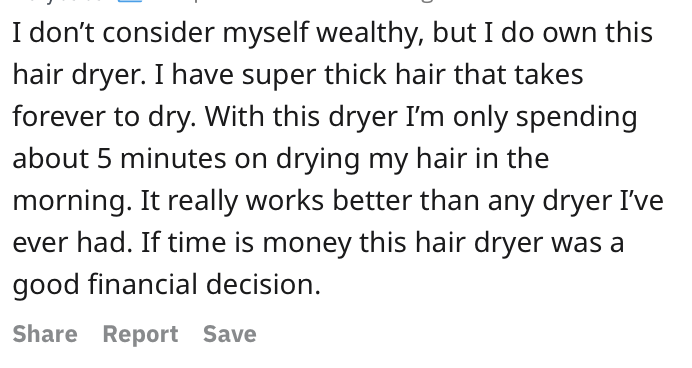 I don’t actually own one so I can’t speak for it, but the world on online reviews is a harsh one. And if only a rare few are trashing the Dyson hair dryer despite it costing an arm and leg, then I think it may actually be worth the money.

However, if you’re still unconvinced, here are some other popular hair dryers to consider:

As expected, copycat champion Xiaomi has a Dyson dupe. Save for the nozzle, the shape is almost an exact rip-off of the Dyson Supersonic. But at the dramatically cheaper price point, could the aesthetic may be the only similarity between the two? 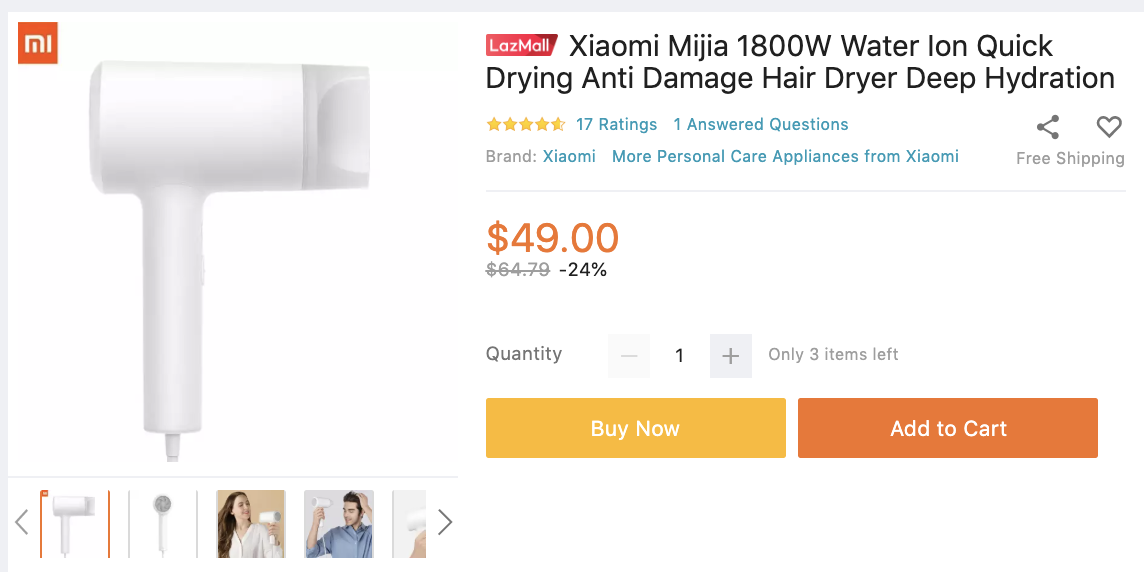 The Xiaomi Mijia hair dryer is $49 on Lazada (via the Xiaomi Online LazMall), which would be cheap even for a non-branded hair dryer. According to the website, it’s quick-drying and does “no damage” to your hair.

The online reviews are generally positive, and while few comment about their hair being noticeably smoother, there a lot of good feedback about the wind being a lot stronger than expected of its size.

Philips is quite popular for their hair dryers, and they’re surprisingly affordable (mostly under $100). The MoistureProtect (HP8281) is one of the more “atas” ones at $159, but it is currently on sale at Courts for $115.

Like the Dyson Supersonic, it uses smart tech to monitor the temperature and adapt it so as not to damage your tresses. I’m not sure it uses the exact same tech, but it does the same thing lah.

There are 6 speed and heat settings so you can switch off the sensor if you want.

This one’s not as popular and high raved about as the Dyson, but it doesn’t seem too shabby either.

It uses a patented nanoe technology to moisturise your hair, skin and scalp – don’t ask me how that’s even possible – and prevents damage with the “double mineral” ions. It’s even said to help reduce split ends by tightening the hair cuticle.

What do you think – is the Dyson supersonic hair dryer is worth splurging on? Tell us in the comments below!

How Much Do Haircuts at Singapore’s Most Popular Hair Salons Cost?

Guardian vs Watsons vs Unity Pharmacy Singapore Showdown – Which is Cheapest?

Fitness & Beauty
Best Fitness Trackers in Singapore – Price List of Fitbit, Apple Watch, Samsung Gear S3 and Others
Sign up for our newsletter for financial tips, tricks and exclusive information that can be personalised to your preferences!